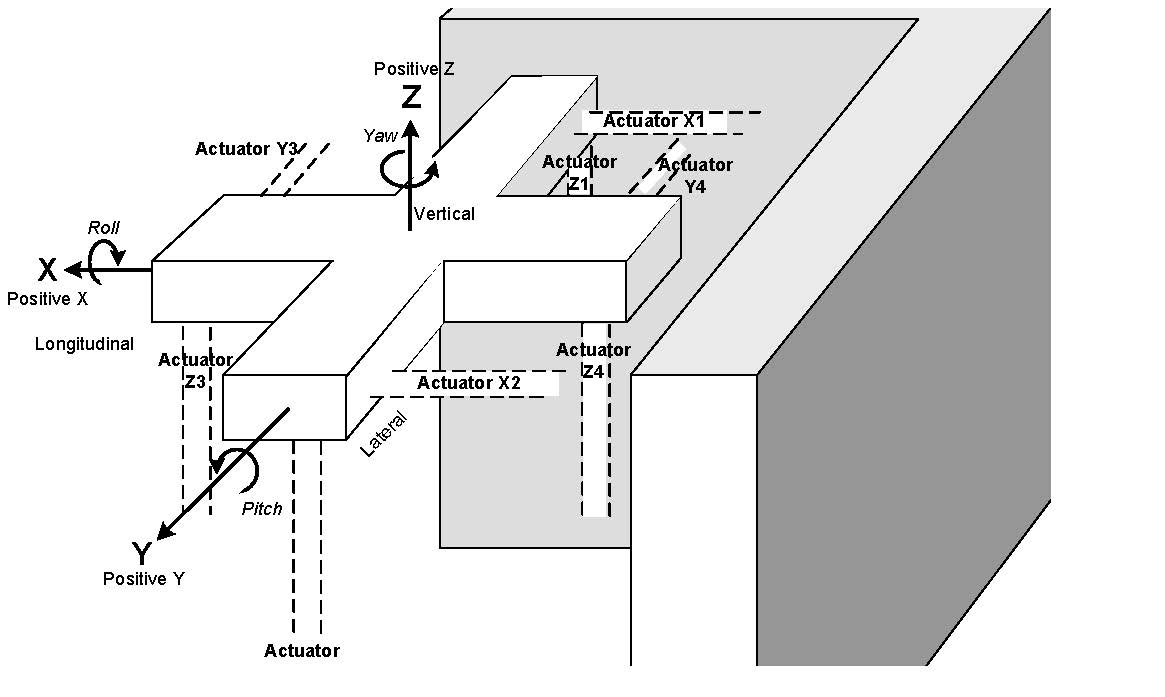 The MAST System's 6-DOFs (vertical, lateral, longitudinal, yaw, pitch, and roll) are driven by a sophisticated MTS controller. The controller seamlessly converts controls in six-degrees-of-freedom space into drive commands for each of the eight actuators, accounting for geometric nonlinearity.  A key feature of the controller is the ability to rotate the X-Y axes about the Z-axis to simplify specimens positioned diagonally.

The controller provides mixed-mode control, which allows each DOF to be controlled either in displacement or force control. Moreover, the controller can slave any DOF to any combination of other DOFs. This technology opens up a wide range of testing possibilities. For example, the mixed-mode control features can be used to specify a lateral displacement history in the horizontal plane while maintaining a constant gravity load or varying axial load on the subassemblage to simulate overturning load effects.

In addition, moments can be controlled about orthogonal axes to simulate specified moment-to-shear ratios that would correspond to assumed lateral load distributions on the structural subassemblage. Rotation or moment about the vertical axis can be controlled to eliminate or simulate limited torsional effects on the test structure. Furthermore, the MAST System can test planar assemblies in a straightforward manner, which in traditional laboratory setups often requires cumbersome ancillary lateral framing schemes to constrain out-of-plane effects. At the MAST Lab, the 6-DOF control can be used to eliminate out-of-plane deformations.

The target end levels describing the new position or force level of the crosshead and ancillary actuators are input along with the ramp time desired to reach those levels. The MAST System operator then sets the move command and ramp function to achieve the desired end levels.

Features of HCC include:

Target end levels may be input from several sources: